What Is An Audio Interface? A Complete Beginner’s Guide (with Video …)

An audio interface is used to make good quality home studio recordings. It's an external sound card with inputs for mics and instruments. This is our Recording 101 - with video guide

If you want to know what is an audio interface, then you probably mean how can I record my …. voice, guitar, keyboard, Ukelele, or anything else that makes a sound! So you know you probably need an interface … but you need to know more!

Welcome to our complete beginners guide to audio interfaces. Here we explain all the basics so you can choose the best interface for your home recording studio.

But first, check out my video, which features the Focusrite Scarlett 2i4 USB audio interface, to get the basics.

Because an audio interface is, quite simply, what you need to get sound in and out of your computer. If you want to make a good quality recording of your voice or any instrument and hear the results so that you can mix and master your recordings, you will need an audio interface. If that has answered your question, then you can hop straight to our post that lists all the most popular audio interfaces right now in 2020.

You can make basic recordings with any modern computer, laptop or tablet as they all come with a built in sound card. You can improve the sound of your recordings to some extent, especially on phones and tablets, with a better microphone. However to really make a professional recording you will need an audio interface or a better sound card.

Below is some detailed info about what is an audio interface, and what it is used for, then we also have a detailed post on how to choose the best audio interface for you.

If you have a USB Mic, do you need an interface as well?

Aha, this is such a common question and a source of much confusion! You tend to think of an audio interface as a box with various inputs for mics, instruments etc and outputs for speakers and headphones. But there are lots of other devices that are effectively “audio interfaces” too. A USB mic is a classic example.

In fact, if you are confused you may find our article on a USB Microphone vs Audio Interface useful.

Effectively a USB microphone is a mic that contains an audio interface. This means you simply plug the mic’s USB lead into a USB port and it will work. You don’t need any other equipment. It may just be a recording mic or it may also have a headphone output too and be a complete input and output device.

There are other USB audio adapters that fit into this category. They work on their own and don’t need any other equipment. So you can get an XLR-USB cable to connect a mic up to your computer, and also guitar-USB, line out to USB etc etc.

Is an audio interface the same as a sound card?

Essentially yes, a sound card and an audio interface do the same basic job. To get sound in and out of your laptop, pc, mac, tablet so that you can process and edit it you need something that turns the sound into a digital signal and back again. That’s what the soundcard or interface does.

Basically, an audio interface is an external sound card, perfect for laptops and tablets, and now widely used by people with desktop computers too. Gone are the days when the only way to improve your recordings was to fit a new sound card inside your machine.

You can almost certainly already record and playback with your laptop, pc, mac or tablet, but buying an audio interface will take you one step towards sounding more professional. An audio interface is the equipment that sits at the heart of any home recording studio.

Which Are The Most Popular Audio Interfaces?

With so many to choose from, how do you decide which on is the best? Here are 5 of the most popular audio interfaces on sale right now. These are tried and trusted home recording studio solutions. 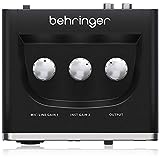 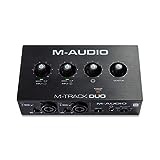 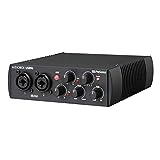 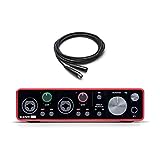 Focusrite Scarlett 2i2 3rd Gen 2-in, 2-out USB Audio Interface with Mic Cable
Buy on Amazon

What is the purpose of an audio interface?

Ease of use and high quality recording – one of the main advantages of an audio interface over on-board sound cards is that, because of the greater physical size and easier accessibility, a wider range of input types can be built into the unit. So, for instance, ¼” jack guitar inputs can be included, as can full XLR microphone inputs, meaning that the device can be capable of connecting to wide range of professional recording equipment. In addition to this, audio interfaces generally feature higher quality audio quality than standard on-board sound cards. Many also have MIDI if you want to connect a keyboard controller too.

How do I connect an audio interface to my computer?

Most audio interfaces are USB soundcards. As long as you have an available USB port or a USB adapter in the case of a tablet then you can connect one up (you will need to check the hardware specs to make sure it will be compatible). So USB audio interfaces are the most common and you should find one that will suit you. There are also a growing number of thunderbolt audio interfaces, and you can still buy firewire too. Thunderbolt and firewire have the advantage of being faster, but tend to be pricier. And of course you must have one of those ports available. As USB has got faster, most people with home recording studios find a USB recording interface is perfect for them.

What is the best external soundcard or audio interface for music production?

We have a sister article which looks in depth at how to decide which is the best interface for you. There is no one right answer! But briefly the audio interface that you will need very much depends on what kind of recording situations you would be aiming to use it in.

Finally when you know how many inputs and outputs you think you will need,  it is a case of choosing how you want to connect – USB, Firewire or Thunderbolt.

Latency: this is where there is a noticeable delay between the actual sound, and its playback in your headphones or speakers which can be very distracting. On modern computers, latency is not a bad as it used to be, but the standard sound cards built into computers are not great, and a dedicated interface will improve this to the point that you shouldn’t even notice any latency. So, if you’ve ever recorded a vocal part, and heard your performance delayed by fractions of a second in your headphones, or used a MIDI keyboard to play a software synthesiser, but encountered a delay between pressing a key and hearing the sound, then an audio interface will fix this problem.

Zero Latency Monitoring (or Direct Monitoring): many audio interfaces have a switch to enable you to hear your sound source directly. So if you are recording your voice, you instantly hear your voice directly in the headphones, there is no annoying delay, and this is certainly a feature to look out for.

Drivers: are pieces of software that enable an audio interface to communicate with the computer. Again, they will help to reduce latency to the point where you won’t notice it.

48V phantom power: Some microphones need power, either to drive active circuitry, or, more usually, to polarise the plates of a condenser microphone. If you want to connect up a microphone that requires phantom power then you will need to purchase an interface with a phantom power switch. If you just have a dynamic microphone then this will not be an issue.

Sample Rate: This is how many times per second that a sound is ‘sampled’ to create the digital signal. The higher the sample rate the higher the frequency range of sounds that can be recorded and processed. The standard sample rate is 44.1 kHz, which can record sounds up to about 22 kHz. We can’t hear above about 20kHz so you’d think 44.1kHz sampling was sufficient, and often it is. However sampling at higher rates (typically 88.2/96) allows the filters required in digital audio to be well outside the human hearing range, which will improve the quality. So when you are choosing an audio interface this is one of the ways of comparing them. For more information on this rather technical subject there’s a nice article here on sample rate and bit depth.

Balanced/Unbalanced: Unbalanced outputs and inputs are made with ‘single-core plus screen’ cables whereas balanced outputs are ‘two-core plus screen’. (XLR and TRS inputs and outputs are balanced, whereas TS are unbalanced). Many budget interfaces are made to a price and have unbalanced inputs and outputs, which can lead to interference and what is called ‘ground loop’.

If you choose balanced outputs and use balanced cables then any interference picked up by the cable is picked up equally by both cores and is cancelled out at the far end, and possible ground-loop problems also disappear because the screen connection is this time not part of the signal path. For simple one or two track recording you should be aware of these differences, but you should be able to make a good quality recording on a budget interface if connected up correctly. If you want to know a bit more about this, refer to our in-depth post on audio cables explained which demystifies this topic.

And don’t forget … now you know what is an audio interface, go and read which is the best audio interface – our bang up-to-date guide however and whatever you want to record. Happy hunting.

Previous Post: « The Ultimate Gear for Your Rock Band in 2021: Best Guitars, Drums + Synths
Next Post: How To Choose An Audio Interface – Which Is Best For Your Recording Studio Needs? »